Shadows of the Hist

When Update 11 launches, it will include many changes and improvements to several things. Some of the things of interest I have noticed are:
•    Champion Point cap increase
•    Four new crafting styles – Dark Brotherhood, Minotaur, Akatosh and dro-m’Athra
•    Improved Undaunted reward chests for the Gold, Silver and Bronze
•    The ability to trade bind-on-pickup items to group members in Dungeons and Trails

The trading between group members of bind-on-pickup items is refreshing to see. Many times I have picked up a bounded item and not needed it and without being able to trade or sell, I end up breaking the item down for materials. This is not all bad, for it does look like I will need more material with four new crafting styles! I seriously can not keep up. At the moment, my Argonian is looking excellent in her Ancient Elf style. Maybe an update in armour, to go along with this update is what she needs! Maybe a more bloodthirsty style of the Dark Brotherhood armour... 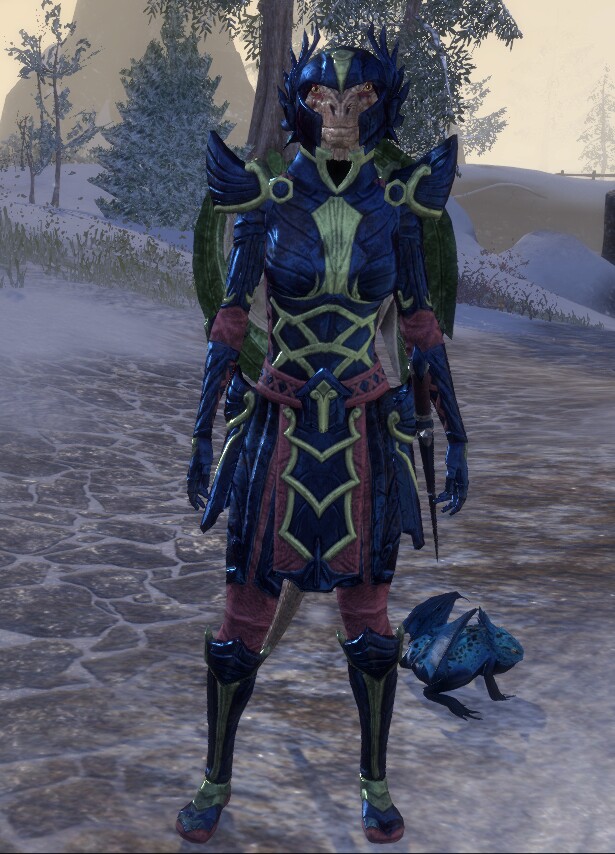 My Argonian showcasing her Ancient Elf armour in the above picture.

As usual, the base-game patch comes at no extra cost to everyone who already owns ESO.

Shadows of the Hist

Do you enjoy the multiplayer aspect to ESO? This new DLC will include two, all new four-player dungeons. Cradle of Shadows, where the Argonians of the Dark Brotherhood need your help, because lets face it, who does not in the ESO world and the Ruins of Mazzatun the “Puzzle City” of the Xit-Xaht tribe.

What am I looking forward to the most? Name Changing!

This is part of the Style Parlour and for those of you who like to chop and change their characters, you will be able to customise looks, hair and even race too. To perform these miracles, you will need to purchase tokens from the Crown Store and be aware, some of the styles will be dependant on race and gender.
I am looking forward to changing my Argonians name. It is a play on my modern name, with the old English version meaning, but I would like for something a bit more Argonian. For example, Sees-With-Glass-Eyes, Bash-With-Shield or Hooks-With-Right. It is really fun coming up with names for Argonians, I thought of loads more but I would be typing all day. I tried to give my female Orc a traditional Orc name, and now she has graGra as part of her surname. There was the intention for one gra, of which I am sure I only wrote one when creating. Maybe I was just too excited to start a new character.

There will also be Costume dyes exclusive for those with the ESO plus, otherwise there will be Dye Stamps to purchase from the Crown Store.

Now for our favourite part: The Pricing!

The Shadows of the Hist DLC is available for people on the PTS (Public Test Servers) now for the PC/Mac players. Otherwise, the DLC releases as follows:
•    August 1st for PC/Mac users
•    August 16th for Xbox One and PS4 players

Available from the Crown Store, The Shadows of the Hist DLC is 1,500 crowns or for the Game Pack Collector’s Bundle for 2,500 crowns. The Game Pack Collector’s Bundle includes the two dungeons mentioned - the Cradle of Shadows and Ruins of Mazzatun, five crown experience scrolls – which will be great for the champion cap increase, the Haj Mota Hatchling Pet and in my opinion the best part, a new Hist Guar Mount! A playmate for Timmy!

Click here for more information on Update 11 and the Shadows of the Hist DLC! Tell us what you are most looking forward to and what you hope for, from the game in future in the comments below.